History of Mary Queen of Angels

History of Queen of Angels Parish

During the year of 1860 the first effort to organize a parish in Fort Scott was made by three Jesuit Fathers from the Osage Mission.  They were Rev. J. Schoenmaker, Rev. E. M. Ponziglione and Rev. J. Van Gach.  The efforts put forth by these men were seconded by the Fort Scott Town Company who donated to the church five acres of land located outside the city limits.  Afterward Mr. Gallaher sold to the congregation at a nominal sum three acres more.  These three acres were negotiated through Father Schoenmaker. In 1864 a stone church was built under the direction of Father Bononcini and Father Paul M. Ponziglione, assisted by Brother O’Donnell a lay brother of the Society of Jesus of Osage Mission. The first priest in charge was Rev. Fr. John F. Cunningham, who was succeeded by Rev. Eugene Bononcini.  As early as 1870 he realized the importance of larger facilities for his rapidly, increasing congregation; and began the erection of the edifice that was consecrated September 29th, 1889. On June 16th, 1872, after a period of two years in building, the church was dedicated the services being conducted by the Rt. Rev. Louis M. Fink, Bishop of Leavenworth.

Father D. Phelan of St. Louis, preached the dedication sermon.The Cost of the church up to this period was $20,000.  Fr. Bononcini was succeeded by Rev.  M. J. Doherty (c. 1873).  He was succeeded by Rev. John Murphy (Nov. 1873), was succeeded by Rev. F. J. Wattron (1874), who lifted the church out of debt. On September 29th, 1889 the church was consecrated by the Rt. Rev. Louis M. Fink, bishop of the Diocese of Leavenworth.  He was assisted by Rev. Joseph Perrier, Vicar General of the Concordia, Rev. M. J. Casey of Newton, Rev T. A. Ennis of Lawrence, Rev. J. J. O’Connor of Paola, Rev. Thomas Warren Fulton, Rev. M. J O’Reilly of Rich Hill, MO., Rev. Joseph Pompeney, Sec. of the Bishop and Rev. F. J. Wattron, pastor of the church. To be able to pay some debts and make some improvements, Fr. Wattron sold some of the property.

The present High Altar in Mary Queen of Angels Church was a personal gift from Father Wattron. Years began to weigh heavily on Father Wattron, and at length he was forced to resign.  Bishop Fink appointed Father Bernard McKernan (1896) as his successor.  After a short period of ten months he went back to Winfield.  Returning to Fort Scott two years later, he remained until 1915.

Rev. Dr. John Maher was appointed pastor of the parish in 1917.  While he was in charge a new school was built.  In 1928 Fr. Maher was succeeded by the Rev. William L. Rice, who remained in the parish until the year 1935 when he died.  In August 1935 the Rev. Patrick J. Nagle returned to the parish. 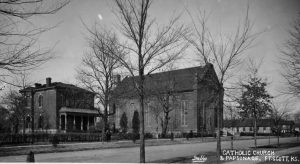